Boba Fett is one of the most beloved characters in the Star Wars Universe, despite the fact that he doesn’t really appear all that often in the films. In saying that, he helped capture Han Solo, froze him in carbonite and sold him to Jabba the Hutt. Now that’s pretty bad arse. Now you wanna know what’s even more bad arse? Boba has gone and got himself a new paint job on his iconic suit in Funko’s incredible new 10″ Boba Fett Pop! Vinyl Figure! 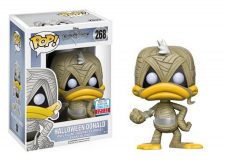